We made the much awaited trip to Scarborough recently to finally try Black Ox Bistro. We went around lunch time and found the restaurant to surprisingly quiet. We were greeted by a very enthusiastic (yet professional) server who escorted us to table. He raved about the ribs, the stuffed chicken and the chicken fettuccine. By the way he described the dishes we were super excited. He definitely knew how do his job well.

For our little one, we ordered the Chicken Nuggets ($7) with fries that came with ketchup and plum sauce. These weren’t your run-of-the-mill breaded nuggets. These were batter dipped and fried. We thought the nuggets could have used a bit of extra seasoning. They did taste good with the plum sauce, however. The portion size was appropriate for our toddler.

Our favourite thing at Black Ox Bistro was definitely their drinks. We tried the Pina Colada and the Mango Lychee drinks. Both were bursting with flavour and were blended to perfection. We highly recommend trying items from their drinks menu.

The first entrée we tried was the Roasted Vegetable Stuffed Chicken Breast ($19). The chicken was stuffed with fire-roasted vegetables, goat cheese and thyme/rosemary sauce. It came with two sides, so we got mashed potatoes and fries. Unfortunately, this was our least favourite dish. It was definitely edible but just wasn’t for us. We did enjoy the fries though.

We have heard people raving about the ribs from Black Ox Bistro for quite some time now so decided to take the plunge (we say that because we rarely order beef) and ordered the half rack Classic Beef Short Ribs ($22). The ribs were smothered with Korean Bulgogi BBQ sauce. We believe the sauce served on the side was a different kind but we don’t know the name. For sides, again we got fries and mashed potatoes. The ribs were tender and juicy and the sauce was the definitely the saviour. While we thought the ribs were good, we didn’t understand the hype around it. 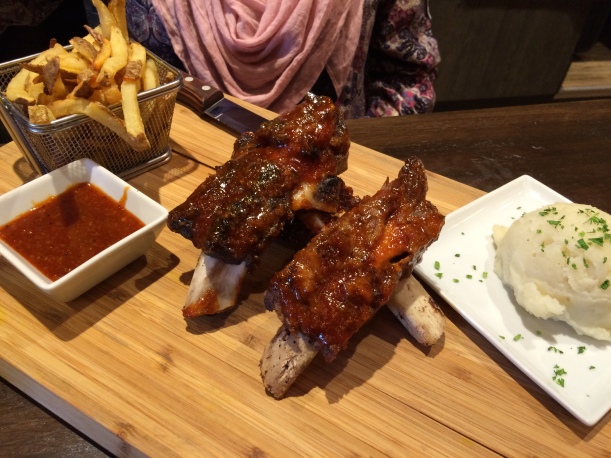 For dessert we ordered the Lemon Zest Cheesecake ($7) with dulche de leche sauce. Dulche de leche is one of our favourite dessert sauces so when we read that we imagined a slice of cheesecake covered with the sauce. It was actually just a drizzle. The first bite was quite lemony but the flavour grew on us after a few more bites.

We have to say that the service was commendable and the professionalism was impressive (given that no other halal restaurant has professional servers). However, when it came to the food we were a bit underwhelmed. It is possible that we didn’t make very good choices for the entrées. Have you visited Black Ox Bistro? What did you think of their food?

We had an amazing time at Muslim Fest this year. Since we went on both days, we got to try food from most of the food vendors. Please excuse us for the horrible pictures; we didn’t plan on blogging about this event and so we had just taken casual pictures of the food we ate.

We had the Lahmacun from Pasha’s, which was a thin bread topped with minced beef, vegetables and herbs. The giant bread was cooked fresh and wrapped with salad. It was quite filling but we thought it was dry. A bit of sauce would have been great. We took a really cool video of it being cooked for Snapchat but…it’s gone now.

We heard a lot of the BBQ Brothers at the Halal Food Fest and had been looking forward to trying their meat lovers poutine. As we lined up, the idea of tandoori chicken, kabob and jerk chicken on poutine just didn’t sound so appetizing. We ended up just getting regular poutine, which was average. 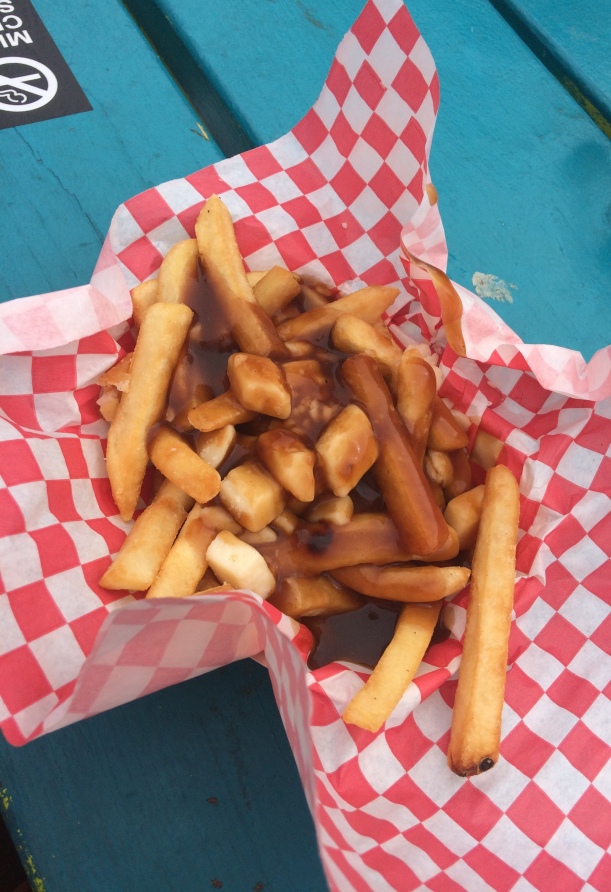 Aside from Pasha’s, there was another Turkish vendor that had interesting things on the menu. One of us got the Doner Shawarma, which was delicious. We had asked for extra sauce, but it still wasn’t enough for us. We also tried their Spinach and Feta Cheese Borek. This was light and fluffy and for $1.50 we didn’t mind trying it. We also got their Baklawa.

Our favourite vendor, by far, was the Chill Out booth. Their mango bubble tea with lychee jelly was the most incredible drink ever. It was so good that we went back three times. The third time, they actually gave us a discount. This drink alone was worth going to the Muslim Fest on both days. We also tried their lychee bubble tea, which was also good, but couldn’t beat the mango one.

East Meats West sandwiches are our weakness. We got the Pastrami sandwich and it was worth every single ounce of saturated fat and every milligram of sodium. Yumm! 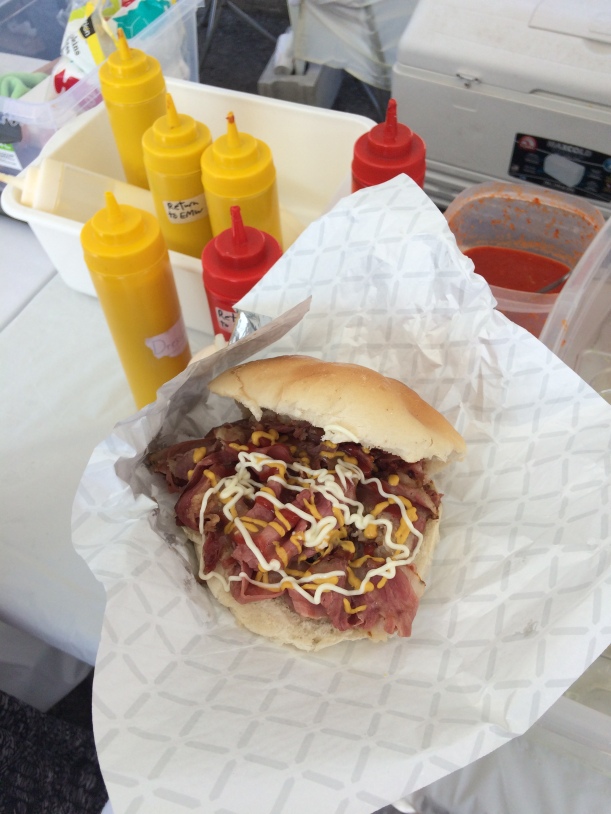 Our mom tried the falooda flavour Kulfi and we also tried fries from the Popeyes booth. Both items were priced well but not really worth the calories in our opinion.

Overall, the beautiful weather, the great food and atmosphere really made Muslim Fest 2015 a great event.